Accordia Golf Trust- Did I miss the boat?

After B and AK talk about it, I decide to look at it again.

I want to answer 2 questions.

2) What is  the structure of the trust, is "dumping" evident.

To establish the earning powers of golf business, I look at the numbers of Accordia Golf, the parent of the trust. The numbers look quite good, with dip in 2009 and 2011 due to GFC and 2011 earthquake. Yet profits are resilient. I like. 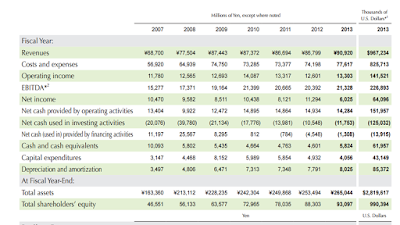 I dig deeper, wanting to know if the numbers are due to organic and inorganic growth.

There are 2 sides to this.

Utilization rate is not a good gauge of  operating numbers.

Did not lead to spike in revenue.

Although I must give credit to their cost management skills, as expenses remain stable too.

The revenue per golf course is going down.

It is the restaurant segment and driving range that is offsetting the weak numbers. 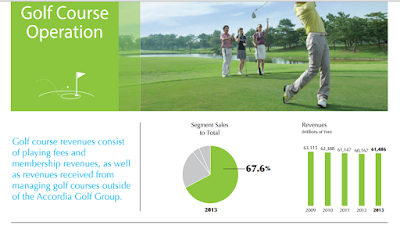 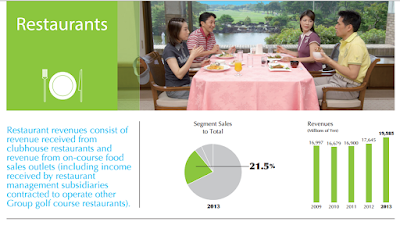 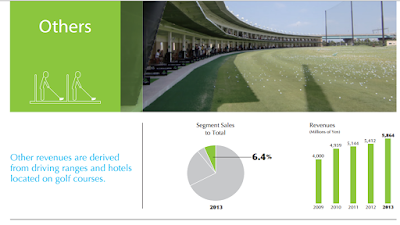 Given all numbers are in Yen in the parent reporting numbers, there is no currency weaknesses at play here. It is all operating numbers.

But the trust only owned Golf Courses, which revenue generating capabilities has been stagnant at best. But the Driving range which has been is growth strategy as highlighted by the company since 2007, and also a mean to sell  merchandise is not include in the trust 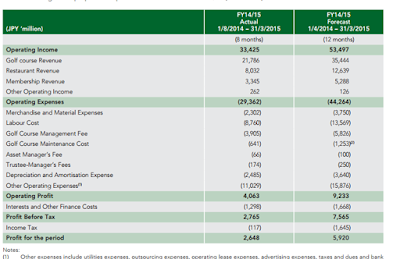 Hence the other growth engines are not at play here with the trust.

No wonder the parent wanted only less than 30% stake in the trust.

They are holding on to their crown jewels.

Also, I tried googling top 100 golf courses in Japan, there are many boasting hosting of International Championship or spectacular views

None can be found in the trust.
http://www.top100golfcourses.co.uk/htmlsite/country.asp?id=84
With its price at current low, and it's pluses and minuses in operation, is it a good buy.
I would think it is quite a good yield play nonetheless.
But i feel ok seeing accordia price going up after doing my research.
So I will let the boat go.
(Added at 2030hrs)
Will I buy? If I am 50% cash, I might nimble. But I have less than that since I have buy back more sembcorp industries.
I believe I might have a cigar puff moment  when they announce quarter result.
Hope I am right that they will see a spike In QoQ earnings ...


Posted by Sillyinvestor at 4:15 AM