I'm Vested interest through my wife portfolio
At one point of time, both me and I owned the counter, but I cut my stake to reduce over-exposure.
If we take 8.25 cents dividends, the yield is 12%, Mr market is not that inefficient, the odds are very high that it will not be sustained.
2 years ago, I blog about APTT. It has 3 growth areas. Taichung as a new franchise area, organic growth through cross-selling. Cross selling suppose to add rev through more broadband and/or prenium digital TV. 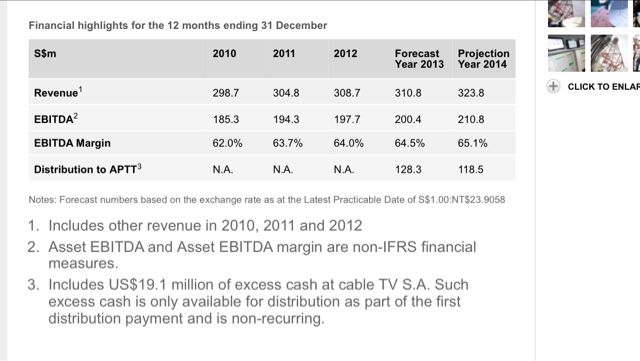 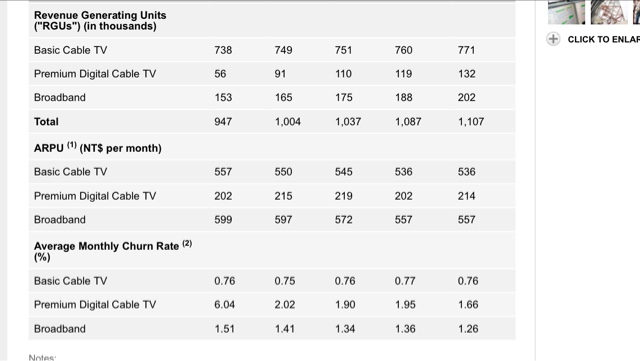 This is their projection. If u look at Q3 results, althought in terms of number of subscribers, they deliver some results, but that is offset by the lowering of ARPU. Poor pricing power=low moat
Taichung provisional license is obtained for a year already. In their last webcast presentation in 2014, they expect contribution from Taichung to only show in 2016. But in my opinon, looking at the subscribers no. In basic cable TV, I do not think 2016 will make a difference. They are basically not making any headway in Taichung at all. Unless Q4 show some significant increase, I would think Taichung venture is a bad investment.
It is a bad investment because capex For Taichung is high and paid by debts. They will be better off staying in their existing 5 franchises.
2016 will be the year when Taichung expansion will be completed and since they have achieve 100% digitalization of set up box, I expect Capex after 2016 to be lower and become more maintainence  in nature. How much is their Capex. I would think 24 mio is a conservative number since management guided 10-12% of Ebita is for maintenance type of capex.
So if we take capex of 24 mio, interest cost of about 44-48 mio and the conservative  OCF of 120-140 mio, sustainable FCF will be 50-70 mio. And roughly 4 cents distribution plus minus ...
This estimate is even lower than the 5.5 cents distribution estimated by KGI analyst. I would think 4 cents would more likely be a worst case scenario and would happen only in 2017. If I am management, i would not so drastically cut distributions suddenly and would use debts to fill some of the gaps first and perhaps further defer expansion capex and hope Taichung picks up.
But according to the analyst report,
"Uncertainty on Taichung expansion
Capex for network build expansion in Taichung is guided lower at S$10m‐S$15m for 2015 (2Q15: S$20m‐S$25m). The rollout of Cable TV is stalled as Asian Pay Television Trust (APTT) is not agreeable to the pricing mechanism proposed by the content providers in the expansion region due to cost concerns. As new competitors have agreed to this, APTT’s strategy is to wait, as APTT believes these competitors are unprofitable and a resolution of this issue may happen in 2016. Meanwhile, we no longer project an increase in subscribers from Taichung."
So if Taichung cannot fail the gap, and 2016 see no resolution. 4 cents distribution is a real reality
I think there is high probability of bad news than good since SGX issue a query of unusual trading activity ( drop of more than 5% in high volume ) on Friday and there is yet any reply.
My guess are:
A new lower guidance for dividends for 2016 is leaked and/or
Taichung expansion hit a snag and the management confirmed it. DBS research made no mention about APTT stopping the rollout due to content costs.
Maybe I will ask my wife to set cut loss at 10%? And that will be 51 cents??
Sillyinvestor at 7:24 AM
Share