Cogent is a logistic company. I will not describe its operations, but you can read it here

I was first attracted to it due to its high dividend yield which includes a 1-off special dividend due to its disposal of asset.

My first attempt at analyzing the company didn't really excite me, although company is generating FCF most of the time, its short track records as a listed company see a U-shape yoyo in terms of revenue and profits. "Highly cyclical" I thought. Also, debt is not low.

1) The LOI for further expansion in Jurong Island. The deal if materialize will increase gross floor area for operation by almost one-third

But truth be told, what really wow me is really the qualitative story rather than hard numbers.

First, one logistic hub has a patented design, which I thought really value-add to customers in terms of both costs and time. 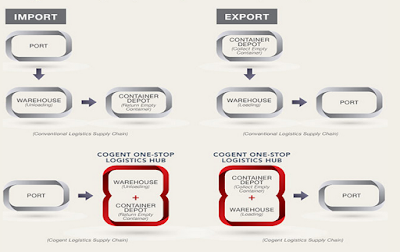 There is no need to move the empty container to a warehouse somewhere else, it can be stored.

There is also synergy in the 4 business. I investigate what cause the dip in earnings in 2010 and the main factor was increase in rental. Cogent like other players, rent warehouses from JTC and provide the services and earn from the services.

With the new logistic hub, it has "retired" 2 warehouses and might not renew a third in 2016.

Another reason why I like it is Grandstand. I felt it has turn around a ghost town rather impressively, although I am sure the reason why it got involved is for the Used Car bus Businesses there, which should be providing some business for its automobile segment of business.

It has also start expansion to Malaysia Port Klang although I would rather not count on it. Malaysia is the only overseas operation contributing less than 10% of revenue. I actually prefer local operations which I felt is less volatile in terms of regulations.

Other things I like, the family owned about 80% of the business but liquidity is not too bad. Remuneration is clean and without options. The Family owned 70% of the business when it just IPOed. and there were frequent buying back of shares. Qualitatively, it seemed like a serious family (Son made CEO and Dad Chairman) with a succession plan. It was the son's concept for 1-stop logistic hub.

Since the logistic hub is the main draw, I calculate for the remaining lease of about 25 years, it need to generate 5.5 mio of NP for the next 25 years to get its cost back. Looking at the Q1 and Q2 results as compared to past year, assume results is generally the same for all segments and the steady improvement of 6 mio for both quarters from a year ago is due to contribution from this hub. Return of asset is about 10%. Nothing to shout about if u ask me.
As for risks, there is plenty of warehouse supply coming in from
Now till 2016. Reading the prospectus, the concentration of a few major shipping customers for their business is a very real risk too. Both might affect earnings
Now the numbers:

Cogent's Warehouse business numbers is "contaminated" by property development of Grandstand, it makes it Gross Margin of about 30% look super high when compared to peers like Vibrant, PTC and CWT. Margin for transportation services is 10%, comparable to the bread and butter of PTC.

2Q NP is already 11 mio, according to prospectus, containers and warehousing segment usually enjoy higher business activity in Q4. But just annualized the results it will be a improvement from last year 3 running record year of profits (17 mio excluding disposal profit of 7 mio)

Final dividend is 2.58 cents last year. Which gave 7.3% yield. Special dividend will not be repeated.

Assume 2 cents dividend instead, they will need to pay about 9 mio which thought it will be rather sustainable.

What do you think? Being a long time since I had this luxury of time to do prospecting, and I am enjoying it.

Posted by Sillyinvestor at 1:41 AM