This trust is interesting.
Growth areas are visible with Capital Green, rental revision.
There are 4 risks.
1) Interešt rate hike
2) Falling rental
3) Rising Vacancy
4) Over-valuation
To know if growth can offset the risks, let's do some calculation. 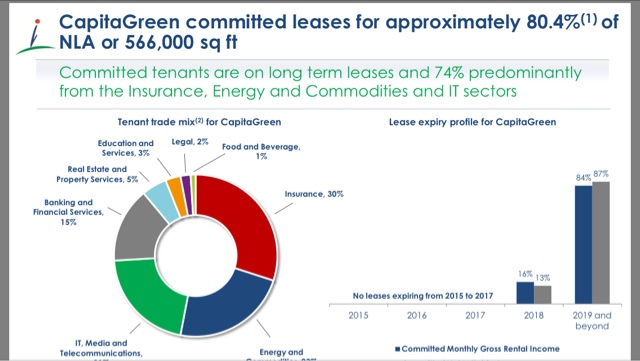 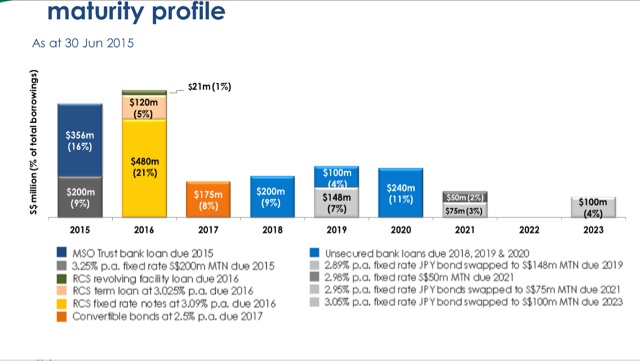 Most of the interešt cost is fix, so the risk of hike comes when it is refinancing. Assume 0.5 interešt in 2015, further 1% in 2016 and 2 % in 2017. Total increase in finace cost will be 24 mio cumulative without new loan to fund Capital Green.
Highly unlikely that The trust will take a 1 billion loan at one go to fiancé capital green given it always spread out its debt obligation, but for simplistic in calculation,  again assume 4% interešt cost (highest of all its loan), it will be about 40 mio and total finance cost will balloon to 64 mio.
Growth more than offset interešt risk.
Next operating weakness.
It's expiring rents are lower than current rents. And it is especially evident for Raffles City. (As pointed out by fifth person report) 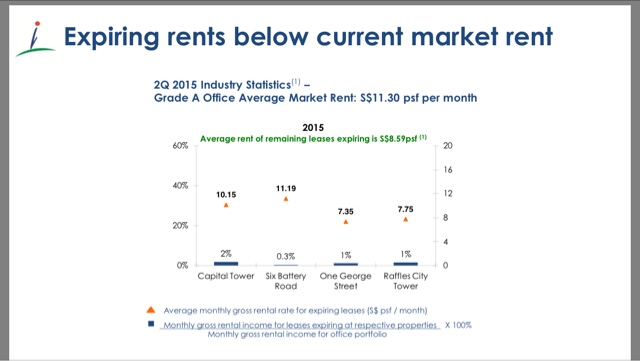 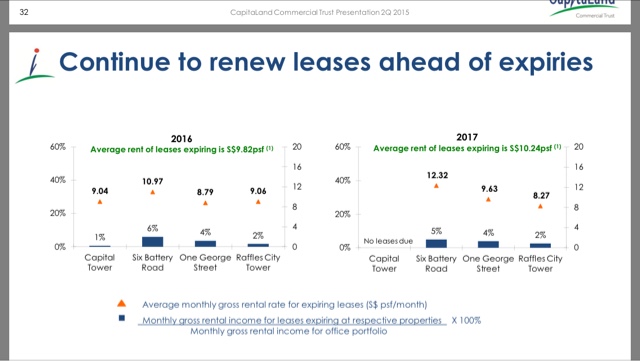 In fact, income from joint ventures, which is mainly from Raffles city has been growing nicely from a year ago due to positive rental revision.
I think the odds are in favor of positive rental revision or at least status quo. Also, my experince with MIT and A-reit is it's entirely possible to have rental revision at above current rental rate. Given there is a good buffer now, I think we are quite safe from falling rental.
That we have the issue of high vacancy. I initially wanted to talk about their tenants, but my gut speculation is that unlike retail  or industry, where there might be some stickyness due to customers' familiarity or transport cost of shifting heavy machinery, I think office shifting/ downsizing should not be too much of a hassle if the savings is worth it. So yes, this is one risk that might show itself when the supply gut come on in 2016.
Next, valuation risk. It's priced below NAV, but I believe that hardly provide any MOS since the cap rate is of the range of 4%. (See B post, I shan't parrot)
Also, I think distribution should be a main factor of valuation. So what price is a good price? I would think 7% yield would be decent taking into account its possible growth, quality asset, prudence capital management. That would be $1.2. It is not actually a far target given how badly US market is falling and te expected knock on effect on Singapore Market. It might NOT be a price that is bear - proof, but it should be a reasonable longer term price should u have to wait out a bear and collect dividends.
Lastly, since Capital Green is so important in terms of growth for the trust. We might want to look at it slightly closer. 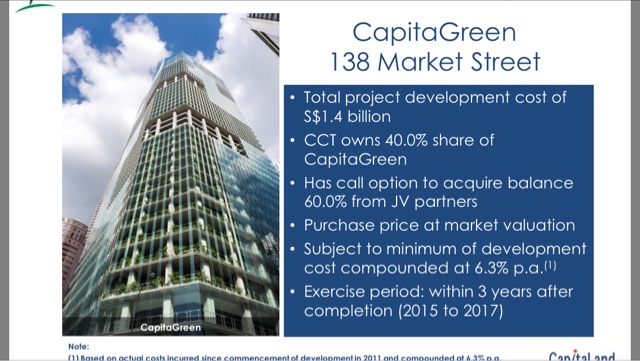 I believed capital green would be bought by 2017 to provide the staggered growth for the next 3 years. Also, the longer they wait, the higher the compounded cost.
I made a simple minimum cost of acquisition  based on 6.3% compounded annually of development cost of 1.4 billion at 2017. With 60% stake, it would cost 1.01 billion. But would it be yield accretive? Given the earlier calculation of 112 mio annual rental, the yield is 10%.
It is Defintely not going to be 10% since the cost of Capital Green is unknown, and we have not factor in other expenses. But if the minimum yield is a low single digit, we can safely conclude it will be not a good deal. So again, we are fighting a losing battle where odds are stacked heavily against us.
Although the trust has exposure to Malaysia property, but since it contribution is insignicant, I decide not to go into the nitty gritty of calculating currency risk.
Conclusion:
Will I buy? I dun know, Defintely on my watch list. I dun really like leverage yield play in the current interest raising environment.
Posted by Sillyinvestor at 10:03 PM