I choke on the Sembcorp cigar puff. It did bounce with a relative better results as compared to expectations. But I bought at $3.85, thinking it was touched a low. LOL

In my previous post, I mentioned that Sembcorp Industries should be better QoQ. The numbers did not disappoint, and the overseas utility did offset somewhat the continued weakness in Singapore Market.

The fall could have been much worse if the overseas market did not pick up the slack.

However, the numbers are puzzling. Given that overseas net profits increase QoQ, one would have attribute the increase of the main contributor would have to be India, the only new expansion from Q1. However, Management only attribute the higher turnover to the "India factor" but not net profits. If you look at the breakdown of India and others Net profits from Q1 to Q2, it is the Middle East that has profits increasing. 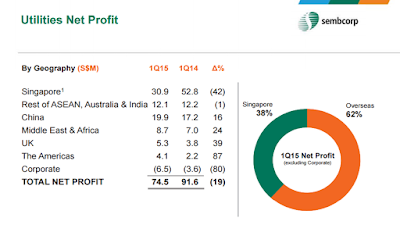 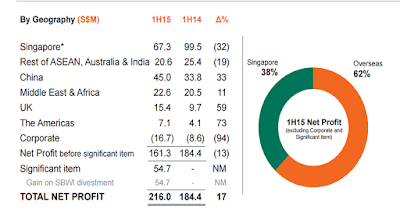 This quarter results makes me wonder how long the gestation period of this new projects will be to bottom line.

But in the longer run, I am satisfied with the Utility segment expansion.

Marine
Marine is definitely going to do worse. Delay in deliveries is actually the better option that is happening as the worse is Brazil Sete cancelling its Drillships orders.

Sete update of its drilling ships and projects report is here (announced on 30 June):

You can only find 4 out of the 7 drill ships order in that update. The other 3 drillships have not start construction, According to management, "more than 80% of the first Sete Brasil drillship has been completed, followed by 74% for the second, 60% for the third and 30% for the fourth. These projects remain cash positive." Given that the first ship is already delayed, the last 3 orders are really hanging in thin air.

Just on 15 June, they still have an update of 29 rigs or drillships. However, it has already being reported Sete need to restructure to access bank credits and only 14 rigs or drillships will be built and another 5 will be co-owned.

The million dollar question is which project will be axed and will sembmarine drillship be axed? 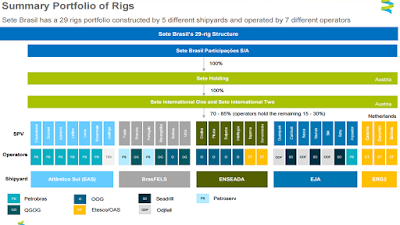 From the chart, I look up the various operators of the drillships.

However, the operator still go back to Petrobas. So Petrobas's fate really affect many.

Seadrill:
A big mystery here. As you can see from the above chart, 3 drillships will be operated by Seadrill. But the whole of seadrill fleet (even those under construction) did not include any of the 3 ships.

I thought they might have change the ship name. So I look up the details of the drillships one by one

They are mainly constructed by Korea yards, and mainly Samsung Yard. 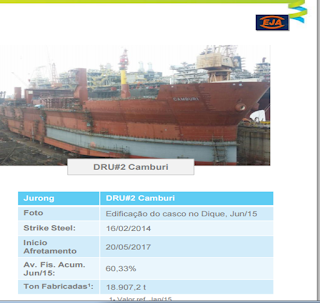 This is a black hole of information.

In the short run, the 7 drill ships will be a curse, as BOth Odfjell and Seadrill talk about delaying some of their newbuilds.

In the longer run, how long this oversupply of oil will last is everyone guess. Although Seadrill believe the replacement of older rigs for better specs ones will continue.

I have accumulated, but get ready for rough ride.

Not for the faint-hearted.

This should well be my last accumulation.
Posted by Sillyinvestor at 5:28 AM