Check out this book. I have really enjoyed it. An investment theme book. 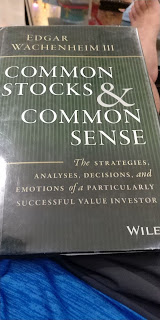 Posted by Sillyinvestor at 7:09 PM 6 comments:

A very short write up. More for discussion and putting it on investment bloggers radar, than throwing in numbers.

Pan United is a leading supplier of cement in Singapore. Hence their business depends on the demand of the construction sector. Information from BCA show that demand is picking up. The lowest projection of demand is expected to go up over the next few years. The projection came before the announcement of IR expansion. I am not sure if the 9 billion investment is accounted for, I assume that even if it is accounted for, all these would mean the projection Should come to the mid range of projection of close to 30 bio.

When the construction sector  is declining in Singapore, pan United still manage to increase revenue and hence improve market shares except for the last 2 years.
If u do some tracking, at its Peak of it profitability, Revenue is half of what it is now but net profits is double of what it is now. Margin keep getting squeeze and became.lower and lower. RMC prices has shown some recovery ij the recent quarter but nowhere near its peak. If u look at Q1 reaults, it has double its profits simply by improved margins and RMC price ccontinue to improve due to expected higher demand in construction.
Beside the IR, the Deluxe of En bloc demand seem not BEING captured in 2018 as the BCA projection was higher than the actual Billings. So I am rather confident that construction demand will be nearer to 30 bio this year (clearing of backlog of developnent of En bloc site) and beyond in 2020.
Pan united has maintain profitability when demand hover around 26 to 29 bio.
Construction is turning, and I expect earnings to double.
Hence there is a chance for a yield play plus capital apprecitation to happen if pan united does double its NP for 2019.
Vested and maiden investment made at 28.5 cents. DYOD.
IF anyone has this in your radar, please leave a comment and I would really like a discussion.
Posted by Sillyinvestor at 10:04 PM 5 comments:

Posted by Sillyinvestor at 8:20 AM 11 comments: