STI is near 3200. It is at or near pre-covid levels. My initial gameplay is to start to offload some counters to increase cash holding as STI goes 3200. I did not.

Whenever I made a sale, I would have redeployed funds back rather quickly. I struggled with an inner voice that is shouting "greed is creeping in", and cognitive dissonance that claimed there is still much to recovery.

1)  STI recovery is lead by banks

A quick look at my companies under my radar, only the banks and YZJ are back to pre-covid level (in terms of price), many counters are still at 5 years low. 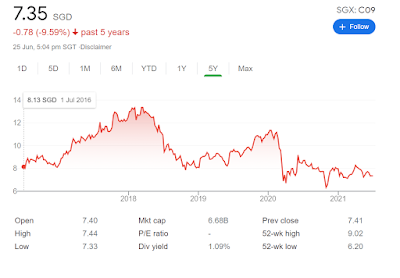 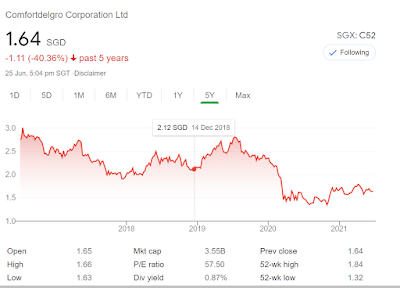 If you are thinking of "reversion to mean" as a way to play the recovery theme, I would think there are still meat out there.

Of course, each and every company has a different story, but CDG and CDL are both contemplating a sale of assets (Australia assets or in the case of CDL, injection to a reit), in normal time, these should act as a catalyst of sort for short term price gain.

2)  The worst is over and yet no reflected in the share price.

CDL has fully impaired the investment on Sincere, Europe is opening up (Think Euro 2020), while CDL has plenty of issues and problems, I would think it would have put his worst behind it.

I am not talking about Covid, but China Tech companies. Alibaba in particular. Yes, ANT will no longer command an lofty valuation if ANT does a future IPO (a BIG IF), but the impact on Alibaba earnings is small, as ANT contribution to alibaba core commerce in low.

The fine on monopolistic practices is more of a closure than a harbinger of worse to come. If there is no exclusive clause for vendors and suppliers to be locked into a platform, how big will the damage be? I seriously do not see an exodus of merchants, since suppliers will be mindful of potential loss of customers. However, as an insurance, I also bought into JD, so together, there could be no hiding place if a supplier would like to participate in the e-marketplace.

Yes, margin for Alibaba e-commerce business is falling, and China e-commercial penetration might be at saturated point. There are the international wing (SEA penetration rate is nowhere near China), and the whether Cloud business can continue to stay profitability and grow it will be a key factor to watch.

3) Restructuring to capture the new economy.

How successfully companies captured new growth opportunities will determine how the market will start to rerate this companies as "growth" companies. There are plenty of examples, MIT increasing the percentage of data centers as a part of its portfolio, Olam, demerger followed by new IPO, Capitaland transformation into a lodging and fund manager, Tianneng Power increasing focus on New Energy Batteries for PowerPlant Storage and EV.

Most of the above mentioned counters have price well below their 52 weeks high. Tianneng Power is growing in double digits for a few years now, with earning visibility still good, yet it is commanding only a PE of 5. Its PE will compressed further if growth continues to materialize. I believe the company has the ability to increase dividends and put the shadow of the short selling report behind it, sooner than later.

I feel there are still opportunities abound for companies. However, market risk has increased for me, since I am almost fully vested with cash only at 10%, although I won't be losing too much sleep over individual company hit or misses since I am a proponent for diversification.

Disclosure: I have a position on the all the mentioned companies in my post except for CDL, yet.

Posted by Sillyinvestor at 9:01 PM