I have finished reading the book "Common Stocks, Common Sense", and have re-read a few chapters twice. I can really relate to the statement about modeling future earnings through qualitative analysis and "guessing" than just simply extrapolating pass data into future. This is especially true for companies that are cyclical in nature. It is not really meaningful to DCF its value, because the earning might be quite volatile. Reits might be a better target to DCF.

To cut the story short, I will like to share how I have applied my own future modeling using Singapore Companies as case studies. Readers who are interested, please read the book, as I am just trying to scratch the surface with my explanation.

First Step: Look for Market leader.
The reason is simple. I want a company that can captured the industry upturn. A company that will gain when industry turn around and not continue to be a laggard.

The example, I am using is PAN United. Looking at Revenue.

You can see from here there is some sort of correlation and according to https://brandongaille.com/18-singapore-cement-industry-statistics-and-trends/
PAn united is the biggest Cement supplier. Engro, another Cement Supplier listed Singapore managed
2018: 153 mio
2017: 141 mio
2016: 144 mio

So I think there is no doubt Pan United is a Key Market Player that will stand to gain when industry upturn happen.

You can see margin destroyed due to lower demand as well as competition. But Pan United has hold market share reasonable well.

You can see the "good times" correlate to good price of cement RMC.

I am aware of different grade of RMC, the one included in BCA statistic is Grade 40, and there are different type of Concrete, some quick solidifying, some green and carbon neutral, but I still think is a reasonable calculated guess.

Again, it seem 2014 is the golden year for a good reason.

BCA projection of demand is always announced in January. In January the projection is

It seem it is going to be a slow year yet again, but the 9 bio expansion by MBS and Genting are announced in April, and I am quite sure assuming 3 Bio A year over the next 2 years when construction start, this demand is not captured in the projection, at least not accounted for in the lower end of projection

Worst case scenario, up to April, it is on track to hit the lowest 27 Bio Demand, so it should not get any worse. Reading on Pan United Quarter reports and BCA announcement of big tenders, various En-Bloc redevelopment again seem un-captured in 2018. 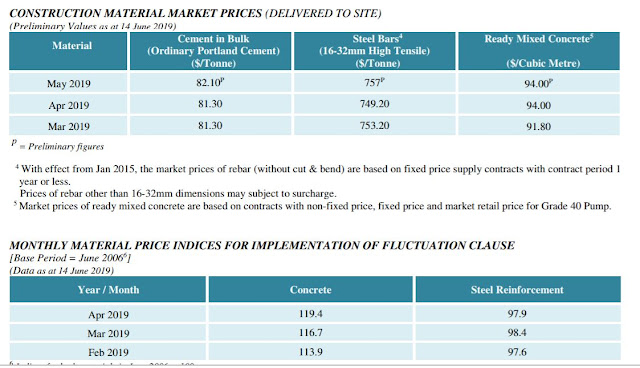 In the book, the author model precise earnings.

I will pass giving a giving an exact figure, I will instead guess  a range of possible earnings. Assuming if price of RMC return to the good old days of 110 and above, will margin be closer to the bountiful of years of above 5% ( >6% in 2014)?

Even if margin double, the best case and most optimistic scenario, it is still only half of what it is like in the good old years. So for a conservative projection, we see EPS of  about 1.4 cents, 1.66 cents in 2020.

So at current price, it makes no sense for me to add, no matter how much I like it. I bought my first tranche of Pan United at 28.5 cents, so valuation use, it makes slighly more sense at future PE of 20 times or 10 times, and dividend of near 4% to 8%

As I mention earlier, I did a range of valuation than giving a fix figure, but if  second quarter earnings makes 1H earning out of my expected range of earning, I know it is time to say good bye.

This is the first time, I spent so much time writing an article on investment, I will leave QAF modeling to next time. (Not vested in QAF)

Posted by Sillyinvestor at 8:29 AM 3 comments: