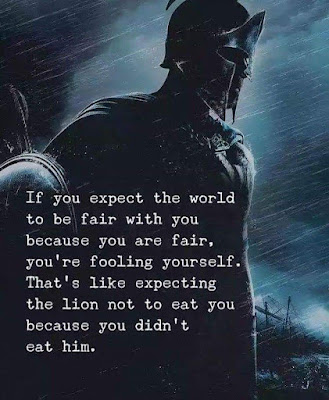 Recently the above words resonate with me a lot. I do not see it as a whin about the world being the "lion" and hence it is survival of the fittest, rather it is about a choice, a choice that we make and hence, we live with it.
We have been taught that our parents take care of us, hence we take care of them. Work hard and study hard, and we will get the food of our labour.
The truth, I guess, is there are plenty of exceptions.
The reverse is true too, Mother Nature has given us almost everything, i.e. resources, fresh air etc, but what have we give back to Mother Nature?
It is about the choice of a process.
Recently, I read up a bit about Karl Marx's ideas about emancipation, and that there is a difference between political emancipation and human emancipation. I guess the romantic vision of human emancipation where the ideas of communion and fellowship is so ingrained in us that people need not institutional rights to protect us, is akin to thinking that lions will not harm us, if we do not harm them.
It is human nature to expect a certain result from a certain efforts. However, as a teacher, I knew firsthand that the threshold of "efforts" is arbitrary, and how much efforts one put in, is often seen in one's own perspective. I seldom hear comments like "I have already done my utmost best" from pupils in the past, but I hear it quite often now. (i.e. Pupils are really more articulate nowadays). From the vintage point of a teacher over years, I have seen how some pupils work really hard without complaints and how some think a little efforts exerted is killing them. Sometimes I just have to reply very blankly that "your best is simply just not enough"
Even if efforts measured by hours are the same, how effective the hours are spent differs, but I would like to point out that it is already very difficult to get some to put in the hours.
The faster we recognize our choices, and accept the possibilities of our choices, the earlier we discard "complaints" and reduce some of the instinctive negative understanding of our world (Some say is survival instinct)
I might be dealt with some lousy cards in life, and I am taking the opportunity to think and plan for my next steps if the worst happens. I guess I would feel really unhappy if the worst happens, but at the same time, I believed I will pick myself and challenge myself to explore new horizons.
Posted by Sillyinvestor at 10:00 PM 3 comments:

I have faced disappointment in both areas, as a participant and also as a teacher/coach.

We tend to give too much hope to good performance and forget that consistency is the most important.

It is useless to be able to spike, serve well during training and let fear takes over in a match. When we can do very well in some questions, doesn't mean we can answer all similar questions.

In the end, the process of refining how I coach/ teach, becomes more meaningful and motivating than the final results.

My players trained hard but didn't get the results, my pupils were lazy and kept telling me they are stressed and have too much work.

Effort does not gives u results, it however will likely give u progress.

Let hope those who passes me fear no hardship and progess in life.

Posted by Sillyinvestor at 8:16 PM 2 comments: 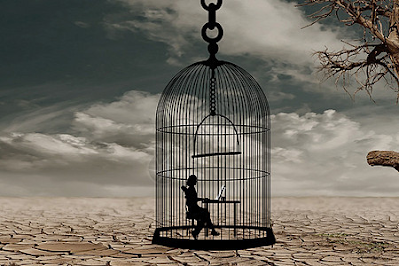 Posted by Sillyinvestor at 3:00 AM 4 comments: