In the broader area of EPS of Q4 and dividend, Lee metals did not spring any nasty surprise. Q4 EPS is almost 1 cents, and Q4 dividend is 2 cents. FY dividend of 3 cents translate to a yield of 9%, but such yield will not be repeated for next year.

Lets look at the nitty gritty: 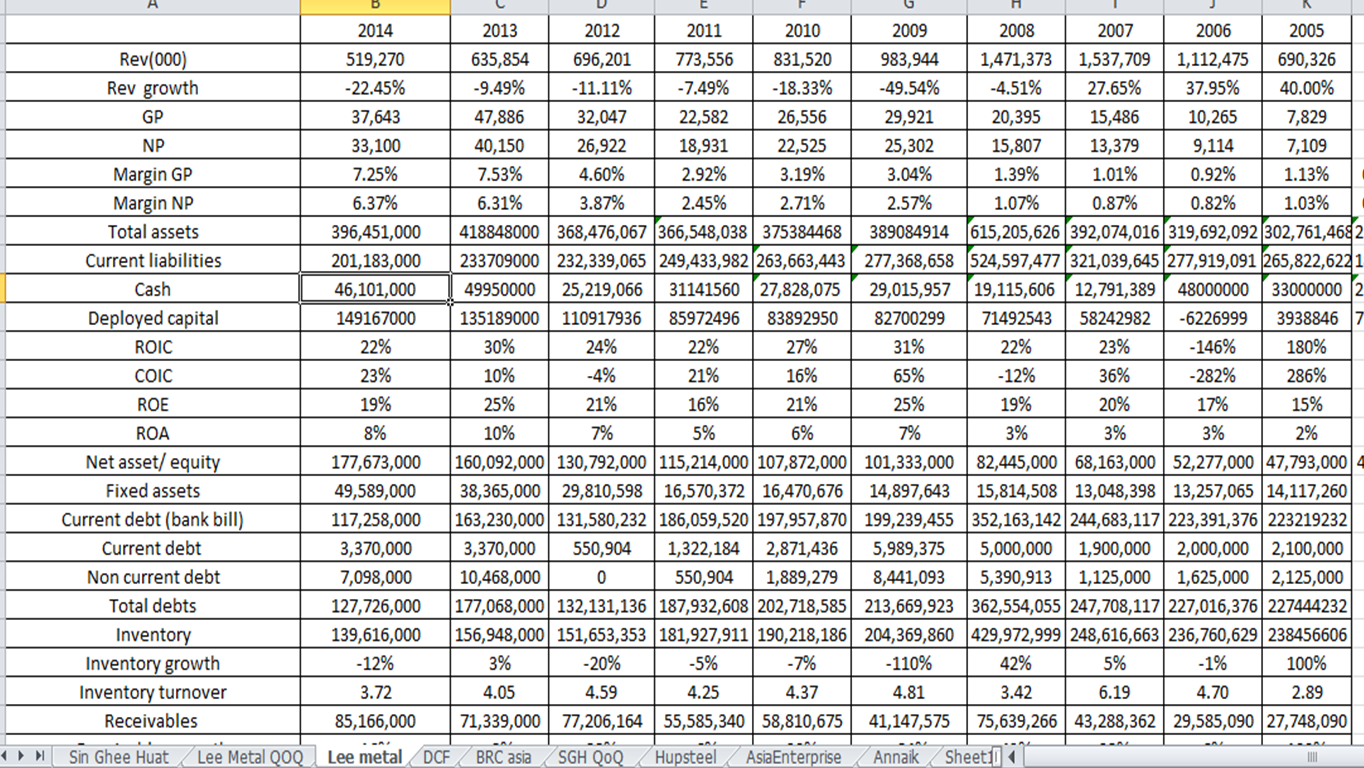 The important margin to look out for include margins, and ROIC, ROE, COIC, ROA etc.

I am not number crazy, as long as there is no sudden spike or crash to warrant attention to more qualitative analysis, I left it as it is, I think the broader operating metric is still rather decent consider the challenging metal environment 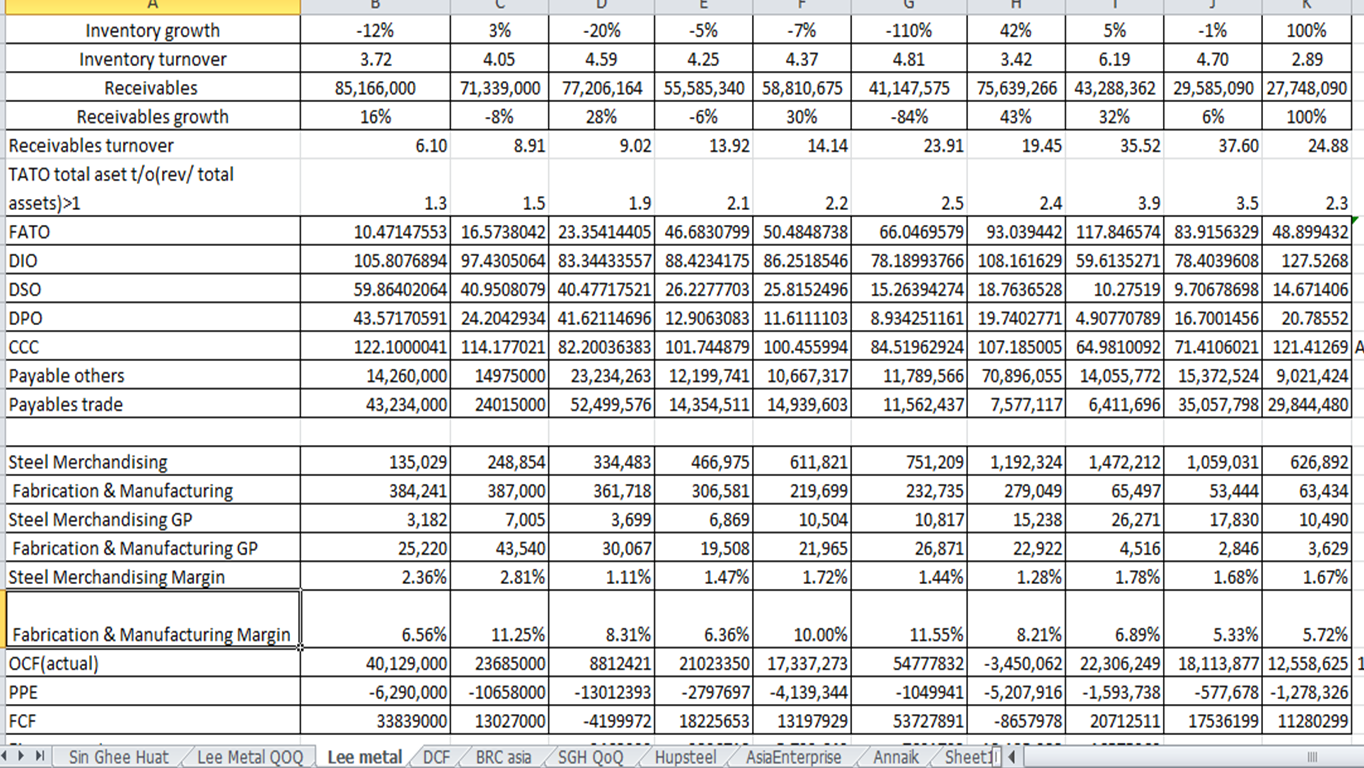 However, Cash Conversion Cycle is at the longest in more than a decade. Receivables is growing faster than the revenue growth of manufacturing and fabrication arm of Lee metals, and this arm is giving longer credit as stated in the quarter report.

Manufacturing and Fabrication margin has also fallen steeply to a low of 6.56%.

Turnover volume has increased but offset by weak steel price.

Given that the steel price has been on a downtrend for more than a year, I expect results to be ugly.

Bright spot is FCF is still strong, and Steel Merchandising is still turning in a profit (abeit low) of 3 million.

I am however wondering if there is still a need to continue expanding on the fabrication and Manufacturing. Depending on the sources you look at, Rebar steel prices has fallen 10-15% compared to a year ago, and given turnover remains relative the same, we can assume tonnage actually increase by 10-15%

But the construction demand while robust, while no longer be growing as residential projects taper off.

In conclusion, I believed the good years of Lee metals might be over.

But I believed it can still manage 4 cents EPS for years to come and continue to pay out 1.5 cents to 2 cents annually. Its execution records so far has been good,

Given the price fall, I believed the bleak outlook is priced in and can be compensated by the yield.

P/S: if you want my excel sheet for easier viewing, just drop me a comment or email

I wanted to know how BRC asia is faring, particularly in terms if CCC, if it is also increasing. 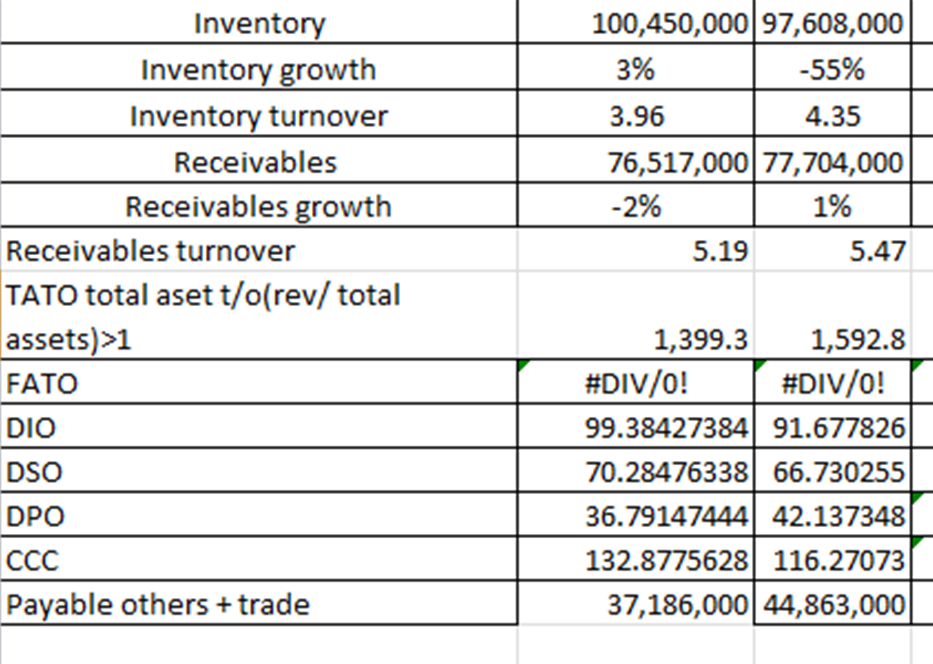 CCC is increasing too, and both look ugly when compared to Lee Metals

So, at least in terms of competition, Lee metals is not going to be killed soon.


Posted by Sillyinvestor at 6:38 PM