My thoughts on ST Engineering Part 1

I did some more preliminary reading on ST engineering. Here are some of my thoughts:

First criteria of cash generating business is fulfilled. WIth the exception of 1 year, every year it generated FCF. Next, it is sustainable. The payout in terms of earnings is usually 0.9 to 1, but for 2013, it is 0.8 What attracted me is the FCF to payout ratio for the last 2 years are low, at 0.65 and 0.72. It seems to me that from 2009 onwards, ST has been able to sustain its growth and dividend payout through its FCF. As for ROE numbers and etc, you can see for yourself that it is high and consistent

I then again run a few combinations of DCF calculations based on the very conservative av. FCF of 420 mio for the past 12 years. (exclude the one-off negative FCF year.) For it to be trading at 3% growth and 6% discount rate with MOS of 20%, the price is $3.8 I would think the 6% discount is rather liberal, unless I can ascertain it can continue to grow above 3%. I decided to go deeper into the aerospace segment:

This is the news that spur me to read further. The highlight of that article is "Transportation orders jumped 74.2 percent, the highest increase ever, boosted by a surge in bookings for civilian aircraft, which soared 318 percent, the largest increase since January 2011." 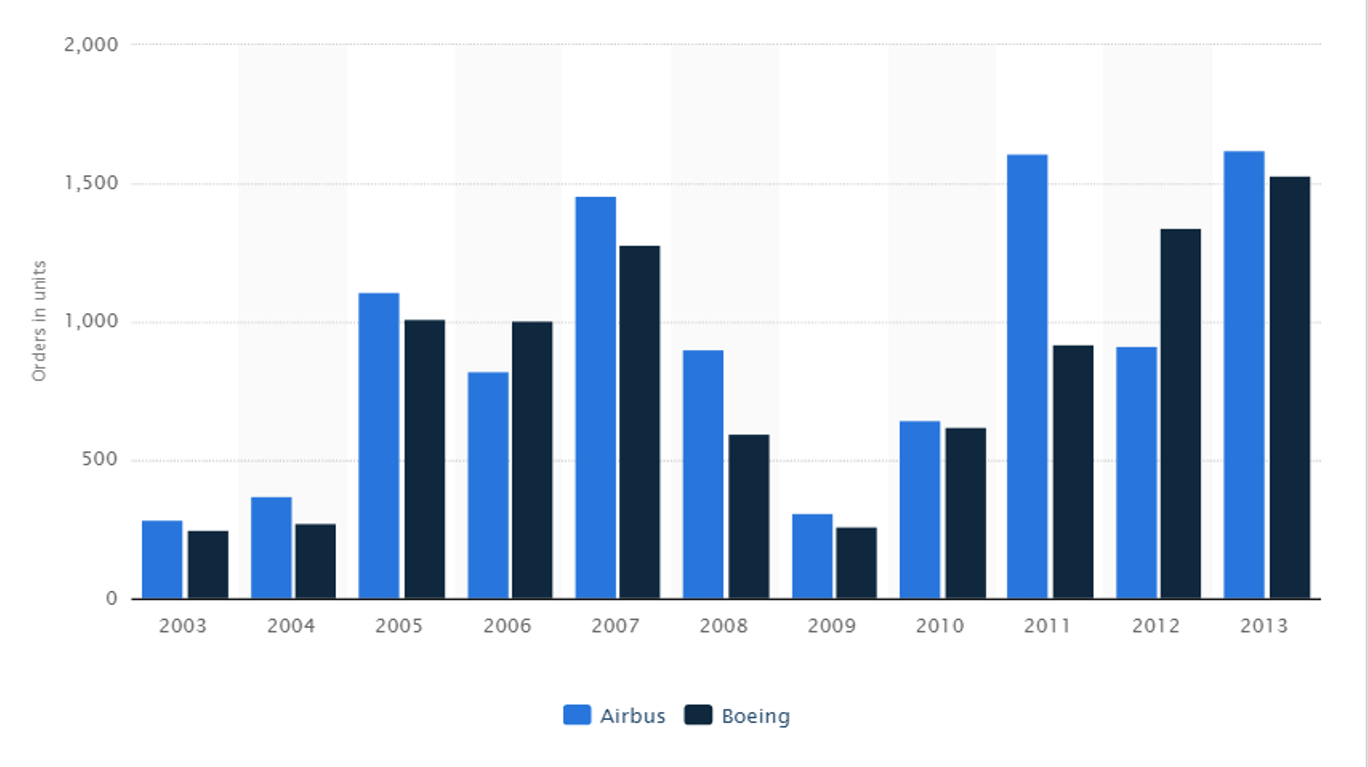 Since the last 3 year period is the strongest in a decade, and looking at 8 months order of both Boeing and Airbus, after adjusting for cancellation, total orders is 1633.

Seem to follow the trend of 3 good years followed by a dip.

Nonetheless ST Engineering 2013 AR has the to say:

Then I track the operation review of the sector from 2010. They have a good execution record. The only delay in estimated execution is the Aerospace Guangzhou, which they announced in 2011 that it will commence operation in late 2013. But in the announcement in 14 July 2014, Guangzhou Aerospace is in operation.

As for other executions, they bought AERIA in 2011, which retrofit the interior of aircraft for VIP cabins and provide customised service. It won contracts both in 2012 and 2013.

The flight school is Australia is also expanding since 2011. The Rotatable Leasing arm set up in 2012 are expanding offices in 2013

IN 2013, they announced a JV dealing with the leasing of aircraft. Could it be another growth area together with the now operational Guangzhou Hanger?

In short, they seem to be able to execute what they set out to do.

A quick look at the various financial review of the various sectors, it seems land system is the only one with weak numbers. e.g. volatile ROE etc, but the worst in the last 5 years is still a decent 22.2% IMHO


I will be reading on the other sectors as and when I can find the time. If I cannot be confident of a higher growth prospect in the longer term, current valuation seem fair, with its 4% yield.

Posted by Sillyinvestor at 10:24 AM