Reflection on my investment journey on Industrial Reit


I would like to summarize my thoughts on my investment journey with Industrial reit, using Sabana and Ascendas as examples. Here are my main points.

1) The pitfalls of 100% occupancy with Master Leases

It is 100% occupied because 1 master Tenant took charge of the whole place, it could be 100% occupied, 50% occupied.  Why does it matter? Because 2 things affect renewal, rental rates and occupancy rates.

When I studied the 4 of Sabana Master leases that are expiring in 2013, a couple of the leases have no rental escalation clause, and during the few years, industrial rents have been on a up trend, so I thought, the negotiation is taking long because Sabana is negotiating hard for a positive rental reversion. It is only when the master tenants got converted, that I got 2 shocks.

a) 3 of the leases has occupancy of less than 70%, and 200 Pandan has occupancy of around 50%. It is little wonder that master Tenant do not want to renew. The sub-tenants numbers are increasing, and hence like I first predict, there is no sharp fall in revenue. But with multi-tenancy, it is very obvious, they could not even do some rental revision.

b) There is financial engineering in the sense of wavier of management fees, that has since expired. That coupled with the poor/negligible rental reversion cause a drop in DPU that cannot be offset by a new acquisition of 508 Chai Chee.

2) The limits of fees structure, whatever form it takes

When I look at Sabana, they have a very harsh criteria for performance fees to be payout. DPU has to increase by 10% before they are eligible for performance fees. I definitely have no problem with that. But they did not collect performance fees, but they keep buying, even a 50% occupied Chai Chee building and collect acquisition fees.

Cambridge has a very different performance benchmark, they get a performance when they outperform the S-reit Benchmark.

At the end of the day, unless the performance fees lead to a lowering of DPU, it doesn't really make sense to go into the nitty gritty of things, Keppel Reit used to get flake due to the performance fees, I dun think there is much complaints in the last 2 years, since they deliver the growth that investors want.

3) Look at the big picture
I tabulate Sabana and Cambridge's every industrial building's rent and purchase price etc. I thought they are comparable. I took a short look at Maple, Cache and Ascenda Reit then too. But their properties are too many to tabulate.

I look at the recent acquisitions and thought Sabana acquistion yield is better, and also command better rent in similar location.

All these research did not bring about better performance of Sabana. In fact, I will be better off investing in Cambridge. 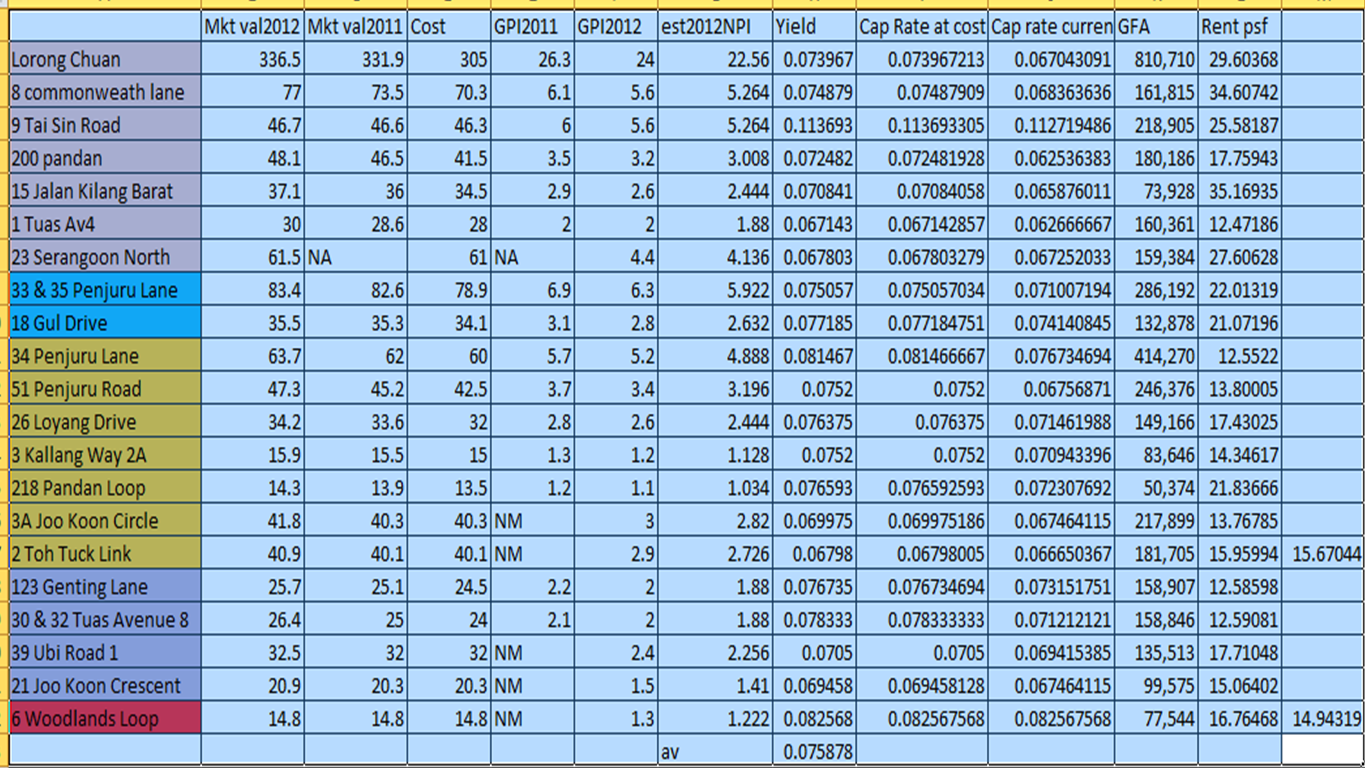 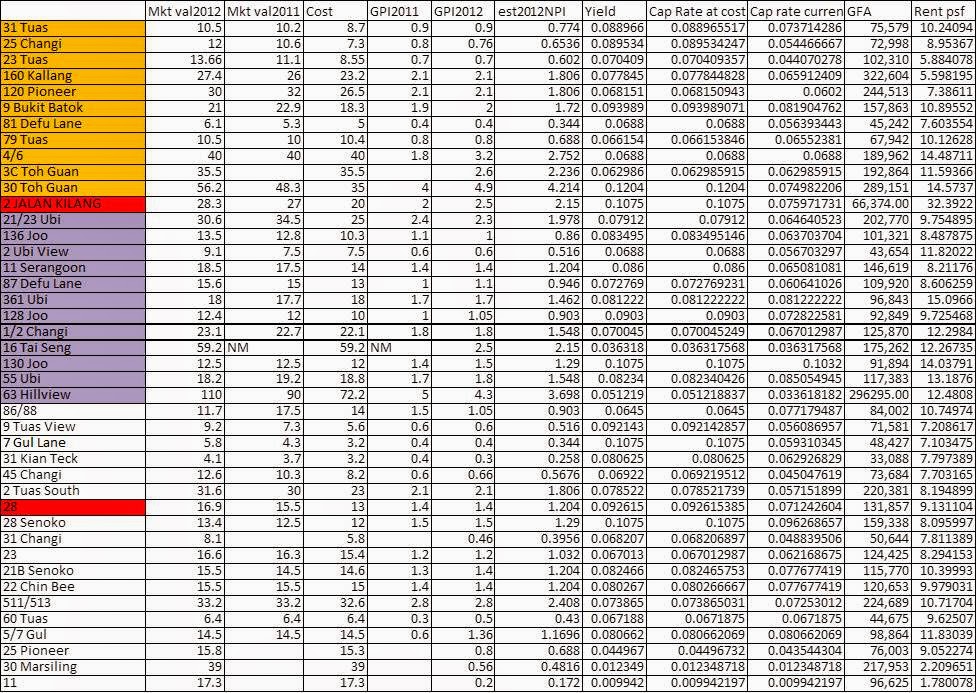 The one on top is Sabana, the second one is cambridge, which I cannot do a screen capture because the list is too long. I did update Sabana 2013 results, but it is in another computer. Nonetheless, the point, don't get lost in the numbers, or over analyse.

How to you gauge sustainbility? Of course past performance is no guarantee to future performance. But I think there are a few things I look out for now:

a) Quality of assets, is there diversification and economies of scale?

Is there a cluster of buildings that is owned by the reit in a particular area, that makes it difficult to opt for competitors?

Are there Business Parks, Science Parks etc, there served as HQ and backroom support and is less affected by poor manufacturing?

Diversity and economic of scale prevent concentration shock of any one building having poor occupancy rate.

b) Is there predictability in fund raising and the discount rate?

Sabana did a placement at close to 10% discount, which I think is excessive. Rights might yield a lower discount? Is there really a need to rush to buy Chai Chee, an 50% occupied building, like it is the best deal of the Century?

Ascendas Reit did placement every few years, sometime consecutively. But the utilization of proceeds to fund acquisitions lead to higher DPU despite the dilution. The discount rate is always around 5% (3%-7%), so there is some predictability. The only time dilution offset growth is in 2009.

c) Is there good management of capital

I like to see refinancing risk spread out. In ascendas, there is no one year whereby more than 20% of loans are due for refinancing.

Also, given the high credit rating, Ascendas all in interest cost is below 3%, yes it will go up when Fed rise interest rate, but it could be offset by growth.

d) Is there a pipeline of acquisition by sponsor?

I used to think the strength of sponsor only matters in a crisis? In the sense the bank will be more willing to lend, and if worse come to worse, Parent company can mop up the rights to raise funds.

It is still valid, but a strong sponsor goes beyond that.

A-reit can do 2 acquisitions almost very year. It can be due to its own sourcing but also due to the strong pipeline of Ascendas.

In conclusion, under my own wishful thinking, since Ascendas Reit already bought Aperia and Hyflux building this year, I think we can expect similar or better distribution this year, unless they do a very dilutive placement. Assume the growth is offset by the dilution, I think a 6% yield is still sustainable.

6% might not seem a lot, but if it is sustainable for 5-10 years, it is easy to sleep at night, knowing when the blood is out on the street, I will dare to average down on this. Average down on Sabana? No thanks, more Master leases expring this year.

Posted by Sillyinvestor at 1:49 AM