A quick look at LMIR's new deal. Is it a good deal?

Occupancy rate = 92.8%
Note: It is high enough number with room for improvement. It is newly opened in 2012 and if you compare this with Pluit Village record, it is being filled up quite quickly.

It is part of a integrated development by lippo, with hotels, Spa and hospitals. I think an eco-system concept is important, it is the only mall in the integrated development. Competition should be manageable since it is located in South Jakarta, which the Jakarta Mall Moratorium covers. The Infinity (Kemang Village)  and
The Intercon (Kemang Village) were just completed in Q1 2014, yet the mall is already 92.8% filled, i believed when more residents move into the development, the mall attractiveness will improve.

Seems like a no-brainer good deal, since it improved it yield will improve despite dilution.
Pg 16 of announcement: 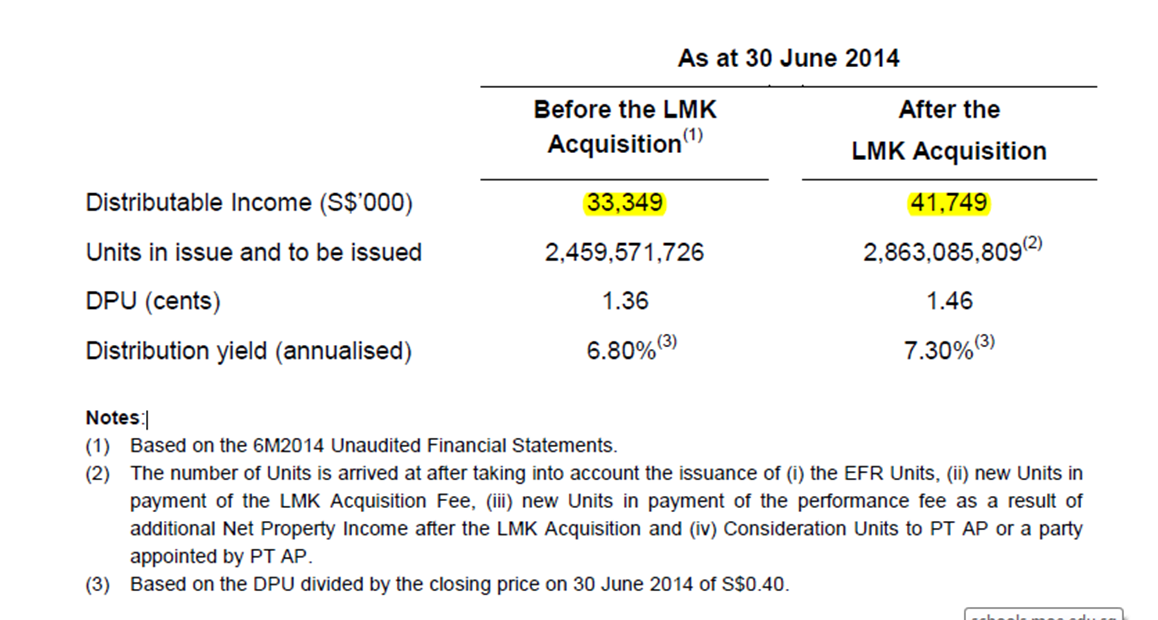 However, can we trust their calculation?

Not withstanding further weakness of currency, which is no fault of management, LMRT has put up a pro forma illustration that did not meet expectations in the past.

Next, I am trying to figure if they calculate the increase in finance cost in the projection of increase of distributable income.

Otherwise, 5% on 140 mio new loan to be taken will result in finance cost of 7 million.

Take away 7 million from 19 million, you will be left with 12 million.

Improvement in distributable income will be only 16.4% instead.

However, in conclusion, I still view this deal positive.

1) It did not seem to look like it is a dumping asset. The mall is quite attractive qualitatively f you ask me.

3) It is a new management under Alvin (Very obvious dumping is taking place by past management), so perhaps we should give him a chance.

There are also 2 spanners:

1) Actual price of the placement shares. It will be at a 10 day average price prior to the completion of the deal. I hope the management keep the price stable through shares buyback and there is no black swan lurking in the corner.