I have wanted to write this.

In December, my gastric is giving me a lot of troubles. Even if I dun eat, my gastric still hurt, and when I eat, I will be very bloated!

I lost my craving which usually is quite impossible. I have good appetite even when I am sick.

I wanted to be referred to a specialist because I have been going to GPs on and off for a long time, and the medicine got stronger and stronger but the relief is often short-lived.

The GP told me govt hospital waiting time is quite long, in terms of months. He ask if I am willing to go private.

At this point of time, I didn't know insirance can cover the gastroscopy and colonoscopy charges.

The doc told me the charges are around 3K. I was quite stunned. He told me it can be cover half by medisave and ask if I have insurance.

I was fanatically checking with my sister to see if it covers my procedure.

She get back and said it covers also pre - and post treatment. 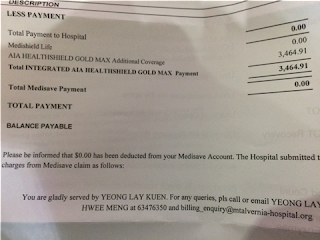 When I was out of the theatre. I was told there was no cancer. The whole process was rather painless but I felt apprehensive at certain point of time.

I thought everything was ok and even contemplated not returning to see the doctor 2 weeks later.

I went nonetheless, and was told certain some of my cells "transformed" I ask" you mean mutated to cancer cells" He said "No, that's why I used "transformed", it might lead to the start of development of cancer cells although the probability is not high. He however still propose I be put on long term medication since I had erosive esophagitis. 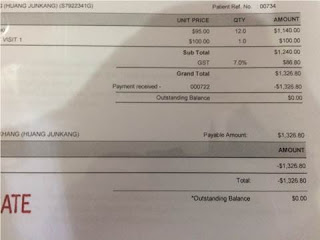 Everything is so blo** expensive.

But my sister told me it can be claimed too.

While the bill is not crippling, I am glad I didn't scrimp on H& S plan.

Posted by Sillyinvestor at 11:19 PM