NAV limitations: A comparison of Golden Agri and First Resources

What a big difference isn't it? There are good reasons for the difference. First, a big part of the asset is from the item Biological assets, which is the plantations that produce the fruit punch used to make CPO.

Look at the two profile of plantations: 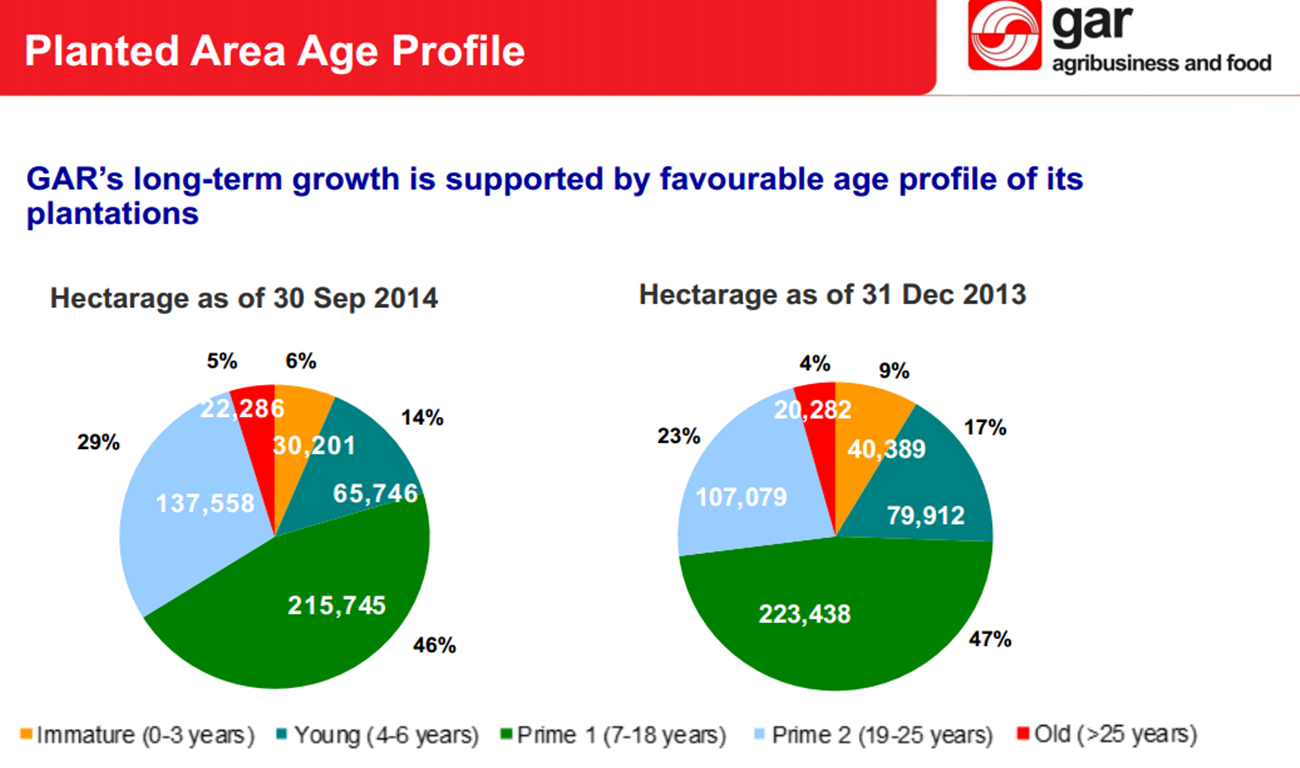 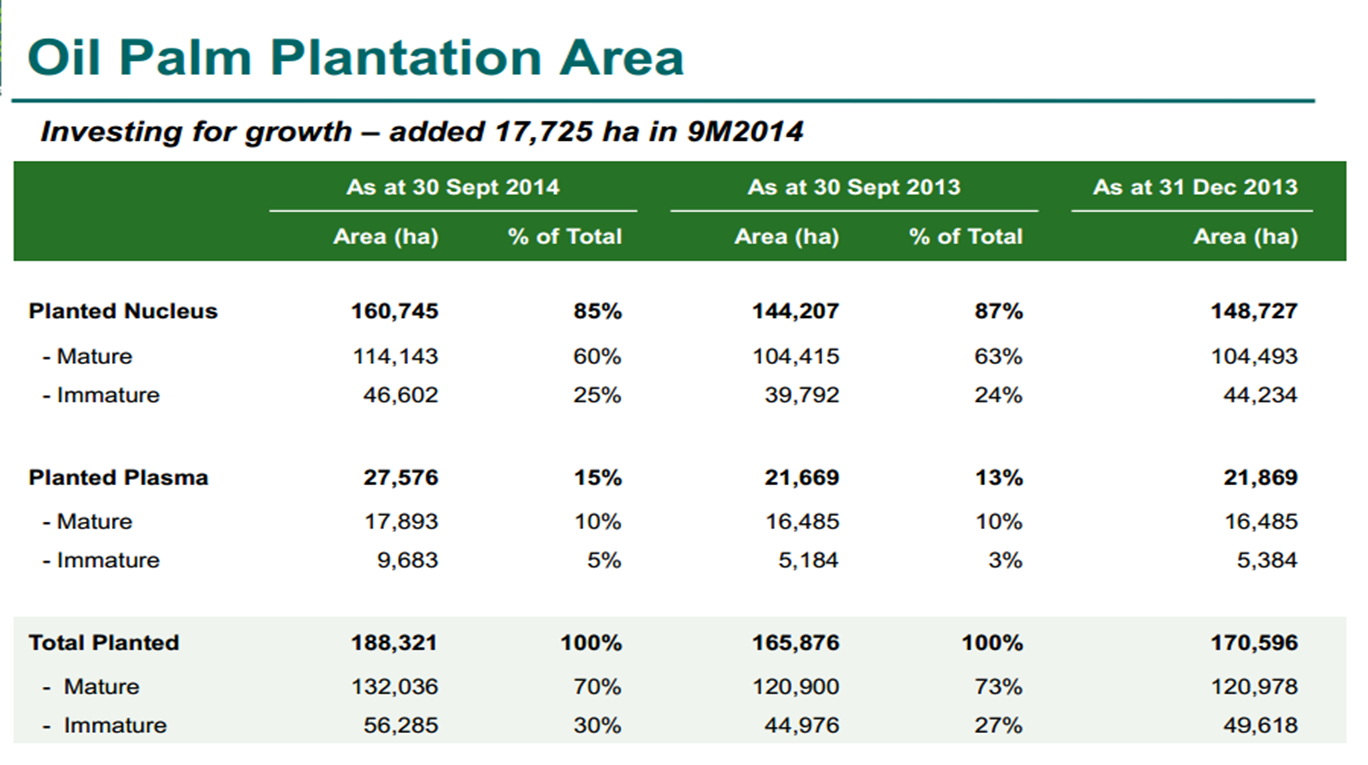 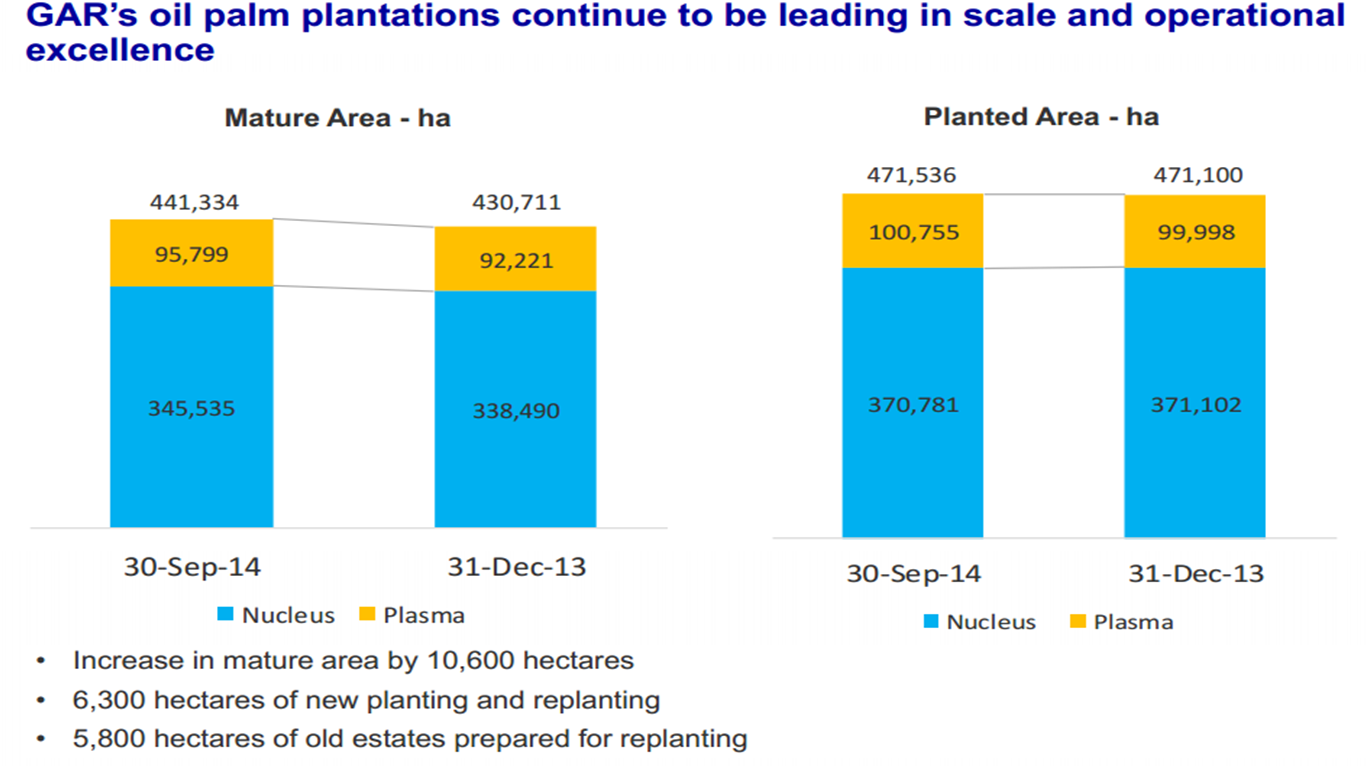 The growth for Golden Agri is relatively muted. However, Golden Agri has a wild card, it has a  Verdant Fund LP, which has concession for 220,000 ha in 201, with an additional 40,000 ha for small holder (out-grower) plantations. GAR is the worlds second-largest palm-oil plantation company, with a total planted area of 464,600 ha in Indonesia. The terms of the contract, which are valid for 65 years (with an option to extend an additional 33) are for palm oil plantations, out-grower schemes, and the construction of a new port.

There is little updates from Golden Agri since 2012, so if we were to take reference from this source:
http://ejatlas.org/conflict/golden-agri-resources-veroleum-palm-oil-plantations-sinoe-liberia

"The company advertizes it will produce over 1 million tons of palm oil, directly employ 40,000 people, and develop infrastructure. 220,000 ha are leased to GVL, plus an additional 40,000 ha for out-growers to produce palm oil, but as of April 2013 only 6,000 ha were planted. The surrounding 100 ha around the port is also the property of GVL. 5% by volume was to be sold domestically at local market rates – therefore allowing 95% of the product to be exported. "

When there is no official presentation from golden agri, we can relate only on third parties website like this. The website contain GVL response to the complaint, while progress is made, I would only think it is one big mess before the fund/ project become positive to Golden Agri

Next Assumption of valuation:

Golden Agri 2013 AR:
Significant assumptions made in determining the fair values of the oil palm plantations are as follows:
(a) No new planting or re-planting activities are assumed;
(b) Oil palm trees have an average life of 25 years, with the first three years as immature and remaining
years as mature;
(c) Yield per hectare, based on average historical performance;
(d) Discount rate of 8.5% (2012: 9.4%) per annum; and
(e) Average market price of CPO of US$966 (2012: US$923) per tonne.

Fair Value Hierarchy
The following table presents financial assets and financial liabilities measured at fair value and classified by
level of the following fair value measurement hierarchy:
(a) Level 1: quoted prices (unadjusted) in active markets for identical assets or liabilities;
(b) Level 2: inputs other than quoted prices included within Level 1 that are observable for the asset or
liability, either directly (that is as prices) or indirectly (i.e. derived from prices); and
(c) Level 3: inputs for the asset or liability that are not based on observable market data (unobservable inputs)

You understand the above? I don't, I just know First resource computation is more conservative. I do not know the equation of computation, otherwise I could do a sensitivity test.

Now is the tough part.

It is established that First resources should definitely command a premium over golden agri in terms of NAV, but the gap is really super BIG.

Is is a 55% discount over 109% premium, and we did not go into other qualitative aspect of Golden Agri as a Vertically integrated player of CPO.

If I would exposure to CPO recovery, I would still choose Golden Agri over First Resources, what about you?

Posted by Sillyinvestor at 11:29 PM